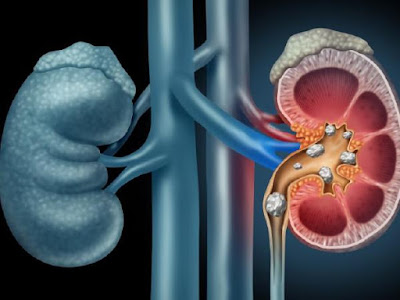 A kidney stone is a piece of solid material that forms in the kidney when a high level of some substances gathers in the urine. The same substances are normally found in urine and at low levels do not cause any problems. Stones may stay in the kidney or they may go down the urinary tract. Since they vary in size, the smaller ones will pass without causing much pain or discomfort.

However, larger ones may get stuck along the urinary tract and block the flow of urine, thus causing severe pain and bleeding. Sometimes it is only necessary to drink lots of fluids and take some painkillers. At other times, if stones become lodged in the urinary tract or cause complications, surgery may be required.


In any case kidney stones are not a pleasant condition, and it is only normal for those with this condition to want to get rid of the problem as soon as possible. There is medication to help with this problem, however over the counter means while being quite effective, they may sometimes cause additional problems. There are also several home remedies to deal with kidney stones that may be of use in case of such a problem. We have gathered some of them below.

1. Pomegranate
Pomegranate has a lot of health benefits; it is full of antioxidants that protect the body from the damage caused by free radicals. Pomegranate juice, but also the seeds are one of the best natural remedy for kidney stones. A study from 2008 concluded that pomegranate juice is able to prevent the formation of certain types of kidney stones. This is attributed to the acerbic and caustic traits of the plant. Both pomegranate juice and seeds are a great help in preventing pain caused by kidney stones. As it is a fluid, it keeps the toxins moving through the body until elimination and it decreases the acidity levels in urine.
Here is a remedy for kidney stones using pomegranate: take a cup of horse gram and add to half a liter of water, heat the mixture until the level of water decreases to one fifth. Strain the solution and collect the soup. Add two teaspoons of crushed pomegranate to it. Mix well and drink this solution once per day in order to prevent pain caused by kidney stones. You may also eat a whole fruit of pomegranate or squeeze its juice and drink it. Or, mix pomegranate in fruit salad. However you will use it, you will most certainly feel the effects almost immediately.

2. Kidney Beans
Kidney beans are one of the foods that doctors recommend eating for healthy kidneys. The shape may be considered indicative of the healing potential this bean has. Looking similar in appearance to the organ of the same name it is able to clear up kidney stones. Kidney beans are very rich in nutrients; they are very high in fiber and are also a great source of non-animal protein, B vitamins and minerals that improve the urinary tracts and kidney health. For the best effect cook the beans in water until they are tender enough to eat, but avoid using meat broth and salt. Strain the liquid, let it cool and strain again. Drink the resulting bean broth in order to dissolve and flush out the kidney stones. Then eat the beans themselves for a boosting of the overall kidney health.
Here is another remedy for treating kidney stone: remove the beans from inside the pods, put them in hot water and simmer on low flame for several hours, until the beans become soft and tender. Then strain the liquid and allow to cool, strain again. Drink the liquid several times during the day in order to relieve kidney stone pain. You should not keep the liquid more than 24 hours, because it will lose its therapeutic properties. Also, you can eat the beans in soup or salad.


3. Berries
Kidney stones are a real nuisance, however the most difficult to bear with is the pain provoked by them. Certainly there are various kinds of treatments that can help against the pain, but the natural way is preferable. So in order to relieve the pain caused by kidney stones, it is advisable to eat a lot of berries, especially blackberries and blueberries. Eat them plain or include them in fruit salad, whatever your choice is, this will help you get rid of the pain caused by kidney stones and it will also add useful nutrients that will boost the overall health of the body and that of kidneys in particular. Blackberries and blueberries contain oxalates, which bind with calcium in the intestine and reduce the risk of kidney stones. The foods rich in oxalates are also important for the general well-being and they are especially recommended for those who have a deficiency of oxalates. Other foods besides blackberries and blueberries that contain oxalates are currants, black raspberries, strawberries, gooseberries and others.

4. Dandelion Root
Dandelion leaves and roots have been used for years to treat liver, gall bladder, kidney and joint problems. It is also considered a blood purifier and it is used to treat eczema and cancer. Other uses for dandelion are as remedy for poor digestion, water retention and diseases of the liver, like hepatitis. Dandelion root also works as a kidney tonic, and it also helps the digestion and supports the bile production. Also, thanks to its natural properties, dandelion root addresses kidney stones pain and cleanses the urinary tract. In order to get optimum results, it is recommended to take at least 500 milligrams of organic dandelion root twice a day.
To use this remedy, take a fresh dandelion root and a quart of water. Boil the water in a saucepan; chop the dandelion root and then add 2 teaspoons of it into the water. Cover the pan and simmer for approximately a minute. Then remove the pan from the heat source and steep for around 40 minutes. Strain and consume in order to prevent kidney stones. You can also add dandelion greens to salads or other recipes and consume regularly.

5. Parsley
Parsley is also a good remedy for kidney stones. It is full of minerals and vitamins such as Vitamin A, B and C, copper, potassium, and thiamin, which is of real help in cleaning kidneys. All of these substances help in cleaning the body of toxins and eliminate other harmful substances. Parsley also helps the kidneys function properly and clear kidney stones. Besides the already mentioned vitamins and minerals parsley also contains antioxidants, enzymes, chlorophyll and volatile oils.
In order to use the beneficial properties of parsley, take some parsley and chop it, then put it in some water and boil for a few minutes. Strain the solution and leave it to cool for another few minutes. Drink the solution regularly to get immediate relief from the pain. Besides cleaning the kidneys, parsley is also good for liver detoxification.
Although parsley has plenty of health benefits, it should not be used in large amounts by pregnant women and those who take blood thinning medication.

6. Lemon juice
Lemon juice is another effective means to get rid of kidney stones and the pain that they cause. Being a citric fruit, lemon contains citrate which is an inhibitor of calcium stones and also makes the urine flow normally by reducing the potential of forming kidney stones. Lemon juice is also capable of dissolving and breaking up the stones from the kidneys, thus allowing them to be flushed out easier.
One remedy for treating kidney stones is to combine lemon juice with olive oil. This remedy is able to break down kidney stones and stop their further growth. Just take four tablespoons of fresh lemon juice and add an equal amount of olive oil. Mix well and drink the mixture followed by plenty of water. Continue this procedure two or three times a day, up to three days. As soon as the kidney stones are out, you may stop applying the remedy. A word of warning: this remedy may not be suitable for larger stones, so you should see your doctor before trying it.